“We have 3 chinese crested. Tobi Jugs, Milli Moo and Franki

Tobi Jugs is a 6yr old male a hairy hairless. He is a snuggle boy and very affectionate and loves nothing more then cuddling up on the lounge or underneath the doona at bed time. He loves walks and loves human attention. Gets very withdrawn and anxious if left alone. A real old man in a puppy body.

Milli Moo is Tobis little sister. Born the same day from same litter. She is a powder puff and you could say almost the opposite to Tobi. She is very independent and doesn’t like human attention or cuddles. If we get 30 secs with her patting we consider ourselves very lucky. She would much rather bury herself in bed and stay there all day. She also loves walks and if anything is a Daddys girl.

Franki was a rescue. We heard he needed a home and couldn’t resist that face. He is only 11 months. Hairy Hairless male. We have had him 3 months and its taken him a long time to settle in and get used to us. He is also very affectionate and only now will cuddle on the lounge or in bed. He has had his fair share of chewing on furniture and doors. He is very lucky we love him. He had a problem in his hip joint and needed major surgery on his leg but recovering very well now and starting to use his leg.

They are all very spoilt and love laying in front of the heater. They have coats there wear outside in winter as they get very cold with no hair to protect them. If we go out we always organise a dog sitter to sit with them. They have the best life. We just loved the breed and how so many people think they are so ugly. We found beauty in ugly.” by Sasha

Like Loading...
A bit about Cisco….
He is named after “Cisco The Kid” an old American western saga with his side-kick “Pancho”. An opportunity came to me via a dear friend of his birth after my dear dawg Jackson departed after I damaged him to the point of “putting down” the week before the previous Christmas. We travelled to Newcastle to collect this beautiful tiny thing of cinnamon and black and drove him to Sydney.
He has been a total reflection of a total reflection of his owner and friends, as he is growing into a stroppy, wildfire, respectful, member of the pack… both domestic and public.
Totally long-legged for his breed, he thinks he is a larger dog with the appropriate bark and gruff! I must say that raising any dog is a challenge and this one is much the same with all the trappings. Barking at TV animal channels is dos favourite, and we cannot watch a “animal” planet program without him going crazy at the screen. When we leave him alone , we must put “Animal Planet” on the TV to entertain him while we are away…..(I’m not sure how this saves us from electricity bills, but it works). He is very independent in “dog park” situations, he tends to preserve his social up bringing and do what he wants to do and …..then… engage with other ramparts. Long in legs, he hardly represents the typical ” King Charles – Cocker Spaniel” but has everything ut the papers to prove it. He is scratching at me now for “dinars” and now he is in my lap on the computer helping me make mistakes, smelling of chocolate! What a wonderful boy, licking (at appropriate times) to reply affection, stealing warm spots in the bet in Sydney wintertime, and alerting me of diversions from my professional paths with growling and recalcitrant actions of my own. He is (like all dawgs) a true individual and is loved and admired by all socially. 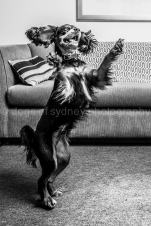 “Gizmo is a cranky old man trapped in the body of playful looking puppy.  He likes avoiding small children who are desperate to give him a pat or cuddle

Albion is a lapdog trapped in a 30kg Staffy cross body. He likes pretty much everything, but neck scratches and sleeping are high on the list.

Gizmo at a wild guess might be a terrier Chihuahua mix, roughly 10 years old.  We got him around five years ago as a friend of mine had rescued him, and I would pop by to walk him and keep him for longer and longer – eventually she said that I might as well keep him!  We got Albion through my boyfriend Glen’s colleague whose Staffordshire had puppies.  He’s meant to be a full Staffy, but just kept growing, so there’s a bit of something else in there!  He’s now three years old, but still the eternal puppy.

I have never seen two dogs who get along as well as Giz and Alby.  If one gets up to go outside, the other is straight behind him.  If they’re not sleeping, they are wrestling, with Albion lying down and Gizmo growling and biting his paws and ears while Alby tries to dodge.  Gizmo wins every time.  Gizmo’s greatest love: cats.  Greatest fear: cats.  Main dislikes are baths, thunder, and cats. Alby’s greatest love: roast lamb. Greatest fear: not getting any roast lamb.  Main dislikes are baths, the cold, and Gizmo stealing his roast lamb.

Both dogs are indifferent to chew toys, unless the other one is chewing one.” by Liz 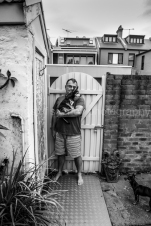 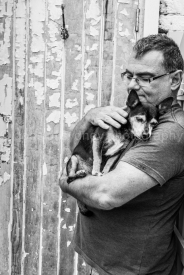 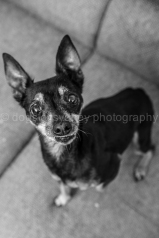 “Jazz is a lovely 5 years old Bull Terrier. He is my birthday gift and I always kidding, that my husband bought him for himself on my birthday. Jazz loves to play soccer and …sleep. His favourite food is chicken, rice with carrot and …everything edible that is located in the kitchen.” by Marta 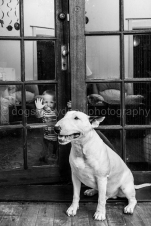