“Hugo came to live with us when he was about two or three years old, and that was almost four years ago now. Hugo is actually his third name. For a few months, back when he was in the dog shelter, they called him Oscar. Before that he must have had another name but we’ll never know what it was. I think Hugo agreed that Oscar didn’t suit him because it took less than 24 hours for him to learn his new name. None of us ever looked back. The first few years of his life are a mystery, although we’ve got a few ideas of what life might have been like for him. But we don’t focus on the past. In fact, we’ve all enjoyed helping Hugo grow into the confident, gentle, loving, funny dog he is now. We measure how far he’s come by his tail: when we first got him, it never wagged. Now it wags every day, sometimes so much it becomes a full body wiggle! I often wonder why someone gave him up in the first place, but I’m so grateful that they did so that we could have him. We now have a two-year-old who thinks Hugo is just the best dog in the world. Thankfully Hugo adores her too, though until that typical toddler excitement is contained, he loves her from just outside of her reach. Every night he sits near her while she eats, stays near her during bath time (amazing for a dog who hates water) and lies in her room until she goes to sleep. Only then will he put himself to bed. And in the mornings, when she stirs, he joyfully runs in to her room to greet her. At this point she always calls out some version of his name. Depending on the day, it could be ‘Gugo!’ or more recently, ‘Schoogo!’ Whichever way, he still knows that’s his name.” by Bethany 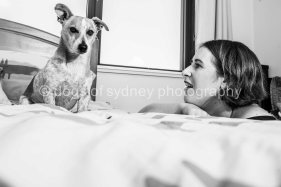